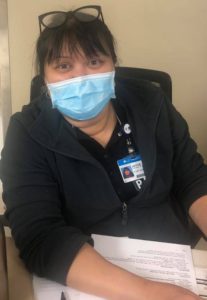 It is with incredible sadness and disbelief that we have to announce the passing of one of our own, NSICU nurse Joyce Pacubas Le Blanc. Joyce gave her life for her patients and we are all in mourning today.

INA will have more to say soon about these tragic circumstances, but we wanted to make space for Joyce’s good friend and co-worker, Eileen Fajardo-Furlin, to share her memory of Joyce.

Where do I begin? How does one describe a friend, a co-worker, a co-craft enthusiast? Joyce. I still can’t believe this is happening. We are a “clean” unit. How did you become the first nurse at UIH to succumb to COVID? So many questions unanswered. But the way her life ended does not define Joyce. It defines how somehow, somewhere along the way, someone, something failed Joyce. But that is for another time.

Let me tell you about my friend Joyce Pacubas Le Blanc. She is the eldest of five children. But she is not the typical overbearing first born. Joyce was more like a middle child without the middle child complex. She was nurturing to whomever needed it. Joyce rarely took charge or precept any of the new nurses. There are enough of us to take on those roles. Joyce had a more unique role in our unit. She was the mother or auntie who “hugged” the new nurses when others like myself came down on them to improve, to move a little more quickly, or to remember to apply what we learned previously. She did not necessarily give physical hugs, rather it was a hug for the soul, a nurse’s soul. She was always ready to say something soothing to all the new nurses or soon-to-be nurses. Or she would feed them or provide whatever they needed. Joyce had the ability to hone in on what someone needed and then give…generously.

And when someone working gave in to the urge to say something not so nice, it never phased Joyce. Just ask anyone in the NSICU, she is the most chill nurse. But that is Joyce. Unlike many of us ICU nurses, her patients did not need to have bed sheets that looked like they were just ironed. But many of us did not see eye to eye with her on this. As much as it frustrated many of us, it did not have the same impact on Joyce. Not Joyce. Joyce accepted anyone and everyone. She certainly did not play by the same rules as many of us. And that is just how Joyce is. That is just how Joyce was. As much as we judged her beds, she never held it against us. Never. And with the more senior nurses, she also had the ability to know when we needed our space. And when that was done, we were all friends again. I wish I could be more like Joyce. 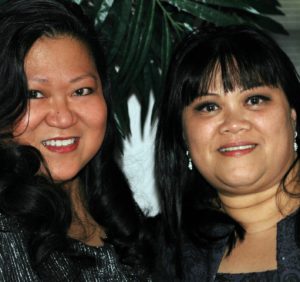 Above all her abilities, one stands out more than all the rest: her ability to have a mental inventory of the whole unit, and sometimes even 6ESD. I remember when we were having issues with our IV pumps not tightening enough on to the IV pole and they would slide all the way down. We discovered that these thingamajigs that was used for…. I don’t even remember. It was used to clamp something onto the IV pole. They had become obsolete for whatever their original purpose was. We figured out if we placed these thingamajig on the bottom of the pump, it kept the pump from sliding down the pole. But those thingamajigs…we only had a handful. Until one day, our census went down and we had to float. We were given instructions by an anonymous nurse that if we were to float to another ICU, they had these thingamajigs aplenty. And they were stored in the bottom drawer of each patient room. Whenever we were to float to this particular unit, we are to return with at least two of those thingamajigs. And before long, we had plenty on hand. If anyone needed anything out of the ordinary, Joyce would definitely know where it can be found. Her talents could very well have been utilized in our central supply department.

I have never even thought about the role Joyce had in our unit until now. Not sure if anyone did until yesterday. Joyce just isn’t the type of person that needed to be the center of attention, in fact she would prefer not to be. She never needed to lead a committee of any kind. But she was generous with her thoughts and ideas. But Joyce was always there for all of us. She is a night nurse but she has managed to infiltrate the hearts of all the nurses, and techs, and clerks on all three shifts. Thinking about what she contributed to the unit makes it harder to accept that she will no longer be there for any of us.